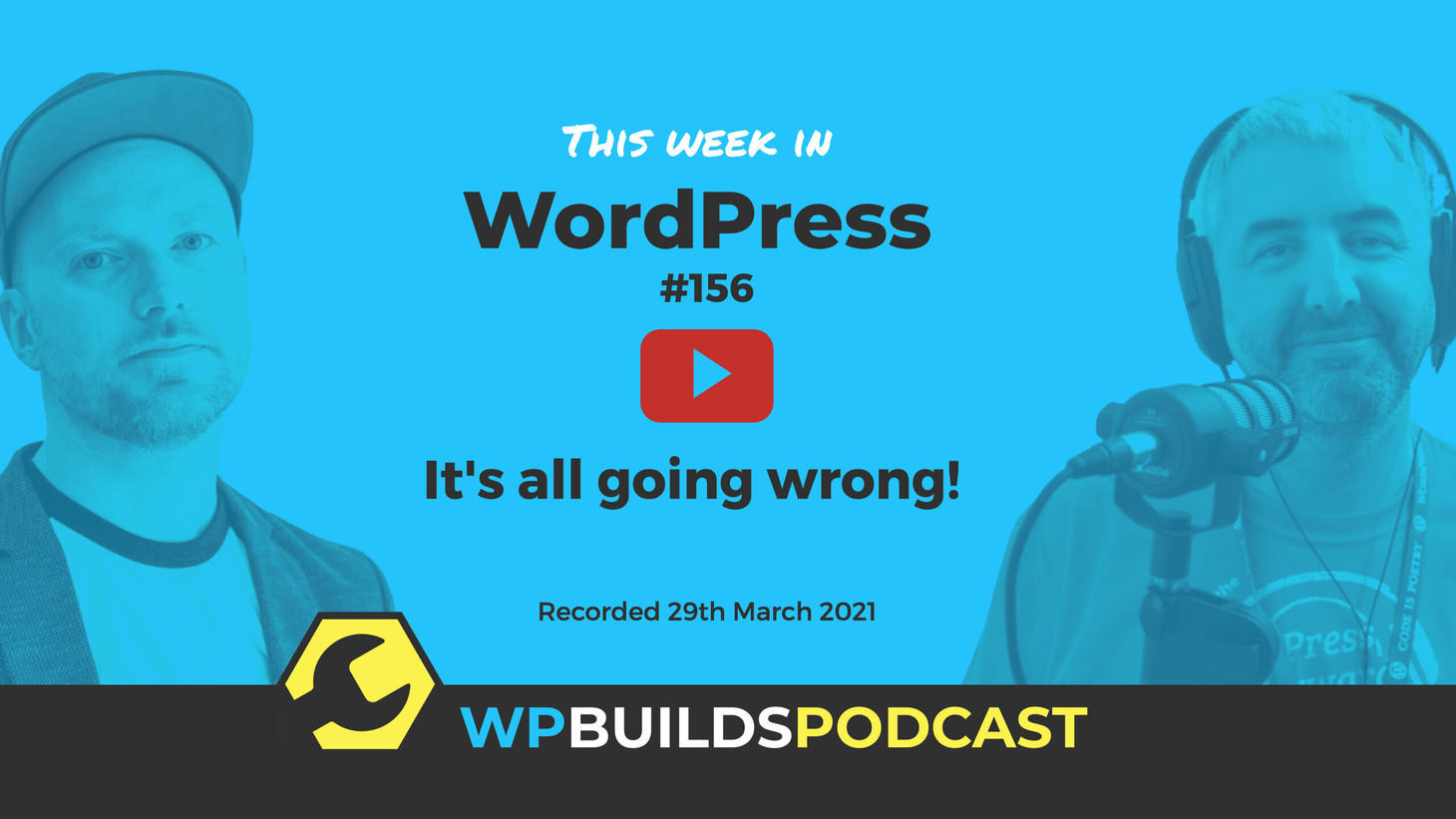 WordPress to Drop Support for IE11 in Upcoming 5.8 or 5.9 Release

"In early March, WordPress contributors began discussing the possibility of dropping support for IE11 in the near future after usage fell below ~1%. This week, the discussion’s facilitator, Héctor Prieto, confirmed the majority of participants are in agreement to move forward and set a timeline for discontinuing support. Contributors are now considering either the 5.8. or 5.9 release..."

"It’s the second edition of WCEU Online, and it will take place 7-10 June 2021! Yet another year where we cannot travel to a new European host city, but that doesn’t mean we can’t have a WordCamp Europe. This year’s event will be another great online event. We’ve heard your feedback and comments on last year’s WCEU Online and we took it to heart. Would you like to get involved...?"

"Expand 2021 brings the web design and developer community together to share ideas and experiences, make connections and support each other. Over two days, Expand 2021 will deepen your connection to your peers and your profession. You’ll come away motivated, inspired and ready to see what you can do next..."

Josepha Haden Chomphosy on the Past, Present, and Future of WordPress – Jukebox Podcast

Josepha is the Executive Director of the WordPress project, and as such, she has been at the forefront of WordPress’ evolution for many years. For the last six years, Josepha has worked full time on the project, and has been the release lead, as well as being involved with community events.

"Most everyone is aware of our contributors who are sponsored full-time to work on the WordPress project. In the near future, you will see a few more sponsored contributors around to make sure we are keeping up with the necessary tasks, from marketing professionals to backend developers. To assist in coordinating, I have created an experimental Slack channel for contributors who are sponsored for 32 hours or more. It is a closed channel, and since I have historically been publicly opposed to this, I have set some expectations for everyone who will be joining..."

Full-site Editing MVP: Can I Build a Landing Page?

"The Core release and Gutenberg teams will make the Go/NoGo decision to merge Full-Site Editing for the next WordPress release in July (5.8) on April 17 or on April 23. In other words, the state of Full Site editing in Gutenberg plugin version 10.4 and 10.5. If it doesn’t get merged into 5.8, Full-Site Editing will be merged in WordPress 5.9 to be released in December 2021..."

"As part of an experiment designed to improve coordination of contributor teams, WordPress has launched a new Slack channel for full-time sponsored contributors. Josepha Haden Chomphosy, the project’s executive director, announced the new closed Slack channel on Friday evening in a post that drew critical feedback from contributors who pushed for more clarification..."

Yesterday, 10up officially announced Convert to Blocks, a WordPress plugin for transforming classic posts into blocks. The goal is to provide users with a safe migration route for old content while removing the burdens of other options in the space.

The Future of Caldera Forms

"Caldera Forms & add-ons will be sunset/retired on 31 Dec 2021. We’ve reached this decision after listening to the feedback provided, needs expressed, and use cases described by quite literally thousands of you, Caldera Forms customers and free users, through the course of our Customer Discovery process, Caldera Forming, and support conversations. We’ll dig into reasoning more at the end of this post, but first, here’s what to expect over the course of this year..."

"With the release of Editor Plus 2.7 in recent weeks, Extendify stamped its brand name on the plugin. The company officially acquired the plugin months ago. However, this was its first public outing as the new owner of a project that has seen a steady uptick in its popularity, recently surpassing 5,000 active installations..."

"As part of our mission to empower web creators and help all Elementor users create professional websites, we are adding a new header and footer functionality to Hello Theme that will allow our free users to create fully functional websites. Up until today, web creators who use the free version of Elementor could not design and customize a header or edit a footer. Those days are over..."

Meta Box is a WordPress plugin that lets you create 40+ types of custom fields and meta boxes in record time.

"On March 23, 2021, the Wordfence Threat Intelligence Team discovered two recently patched vulnerabilities being actively exploited in Thrive Theme’s “Legacy” Themes and Thrive Theme plugins that were chained together to allow unauthenticated attackers to upload arbitrary files on vulnerable WordPress sites. We estimate that more than 100,000 WordPress sites are using Thrive Theme products that may still be vulnerable..."

"On December 22, 2020, our Threat Intelligence team responsibly disclosed a vulnerability in Facebook for WordPress, formerly known as Official Facebook Pixel, a WordPress plugin installed on over 500,000 sites. This flaw made it possible for unauthenticated attackers with access to a site’s secret salts and keys to achieve remote code execution through a deserialization weakness..."

"This month we have listed 39 vulnerable plugins and themes that affect more than 7.6 million sites..."

This is part of our A-Z of WordPress series (where we attempt to cover all the major aspects of building and maintaining sites with WordPress). Today it’s the letter G is for… Gutenberg (Goootenberg!)

"Keeping tabs on these factors sure seems like a worthy endeavor. However, it’s not just for convenience. Google is planning to integrate visual indicators of page experience into search results in May 2021. The move has the potential to affect both SEO and how a website is listed on the search engine results page (SERP)..."

AI: Ghost workers demand to be seen and heard

"Artificial intelligence and machine learning exist on the back of a lot of hard work from humans. Alongside the scientists, there are thousands of low-paid workers whose job it is to classify and label data - the lifeblood of such systems. But increasingly there are questions about whether these so-called ghost workers are being exploited..."

Stripe Checkout: We built Checkout so you don’t have to

"We’re excited to introduce Link with Stripe on Checkout—a way to let your customers securely save their payment information and pay with 1 click on your site and across thousands of businesses using Checkout. We rolled out Link with Stripe with select beta users over the past few months and have seen returning customers check out 4.4x faster on average..."

No spam. We'll never share your email address and you can opt out at any time.